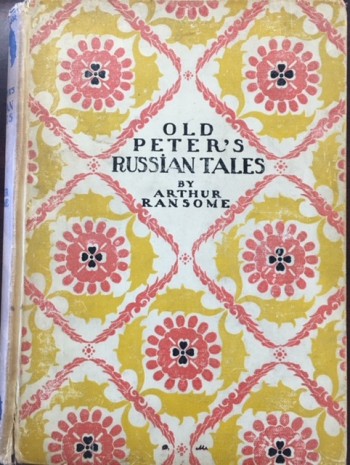 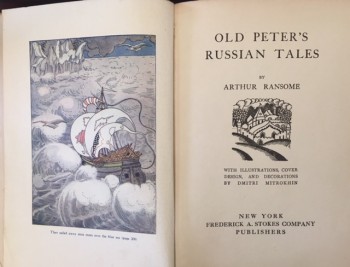 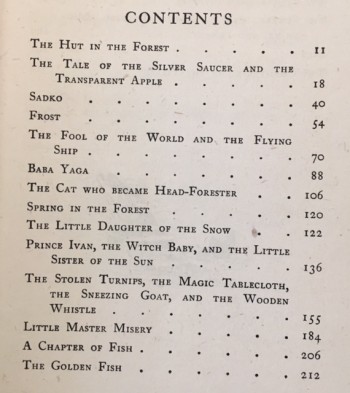 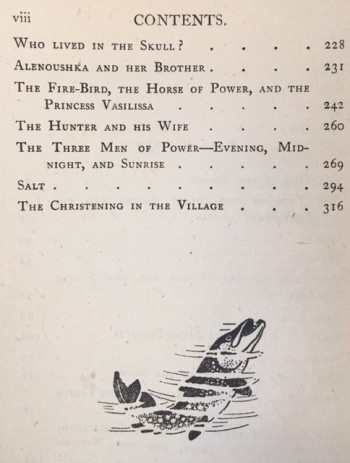 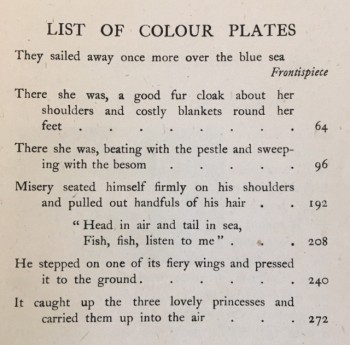 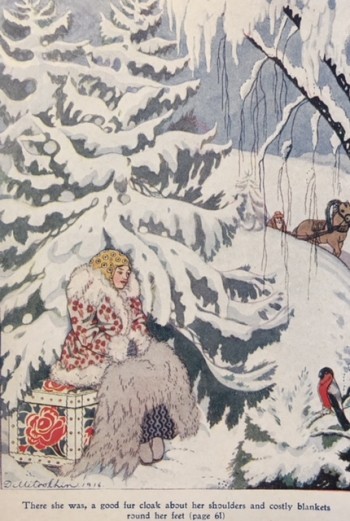 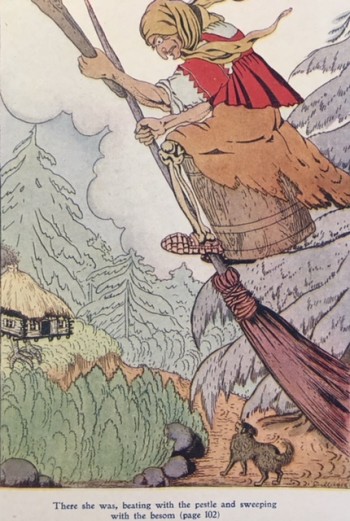 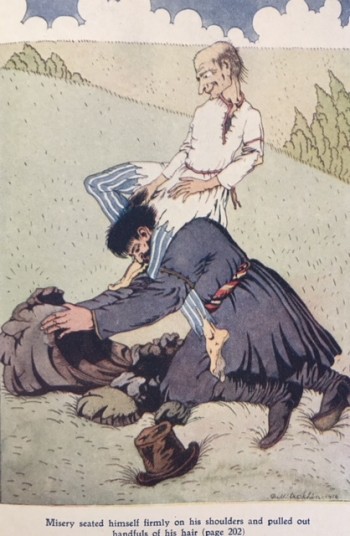 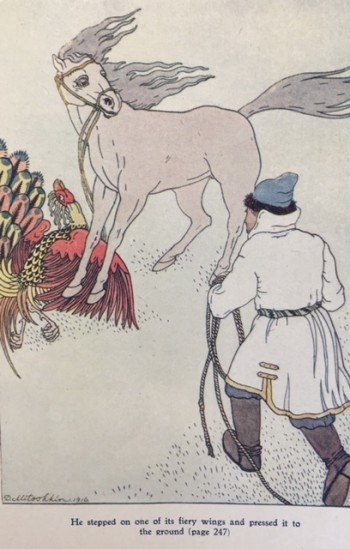 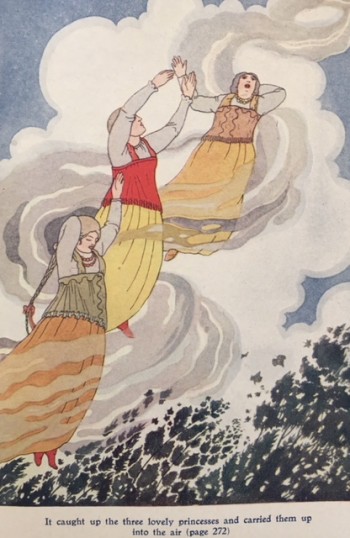 1917 Printing (Frederick A. Stokes Co.) No marks or writing observed in text. Binding shaken with a small crack in front hinge. All pages secure. Bumped and frayed corners. Chips at head and tail of spine. . . . . . TOC: 1.) The hut in the forest -- 2.) The tale of the silver saucer and the transparent apple -- 3.) Sadko -- 4.) Frost -- 5.) The fool of the world and the flying ship -- 6.) Baba Yaga -- 7.) The cat who became head-forester -- 8.) Spring in the forest -- 9.) The little daughter of the Snow -- 10.) Prince Ivan, the witch baby and the little sister of the sun -- 11.) The stolen turnips, the magic tablecloth, the sneezing goat and the wooden whistle -- 12.) Little Master Misery -- 13.) A chapter of fish -- 14.) The golden fish -- 15.) Who lived in the skull? -- 16.) Alenoushka and her brother -- 17.) The fire-bird, the horse of power and the Princess Vasilissa -- 18.) The hunter and his wife -- 19.) The three men of power : Evening, Midnight, and Sunrise -- 20.) Salt -- 21.) The christening in the village. . . . . . . . FROM PREFACE: The stories in this book are those that Russian peasants tell their children and each other. In Russia hardly anybody is too old for fairy stories, and I have even heard soldiers on their way to the war talking of very wise and very beautiful princesses as they drank their tea by the side of the road. I think there must be more fairy stories told in Russia than anywhere else in the world. In this book are a few of those I like best. I have taken my own way with them more or less, writing them mostly from memory. They, or versions like them, are to be found in the coloured chap-books, in Afanasiev's great collection, or in solemn, serious volumes of folklorists writing for the learned. My book is not for the learned, or indeed for grown-up people at all. No people who really like fairy stories ever grow up altogether. This is a book written far away in Russia, for English children who play in deep lanes with wild roses above them in the high hedges, or by the small singing becks that dance down the gray fells at home. Russian fairyland is quite different. Under my windows the wavelets of the Volkhov (which has its part in one of the stories) are beating quietly in the dusk. A gold light burns on a timber raft floating down the river. Beyond the river in the blue midsummer twilight are the broad Russian plain and the distant forest. Somewhere in that forest of great trees--a forest so big that the forests of England are little woods beside it--is the hut where old Peter sits at night and tells these stories to his grandchildren. 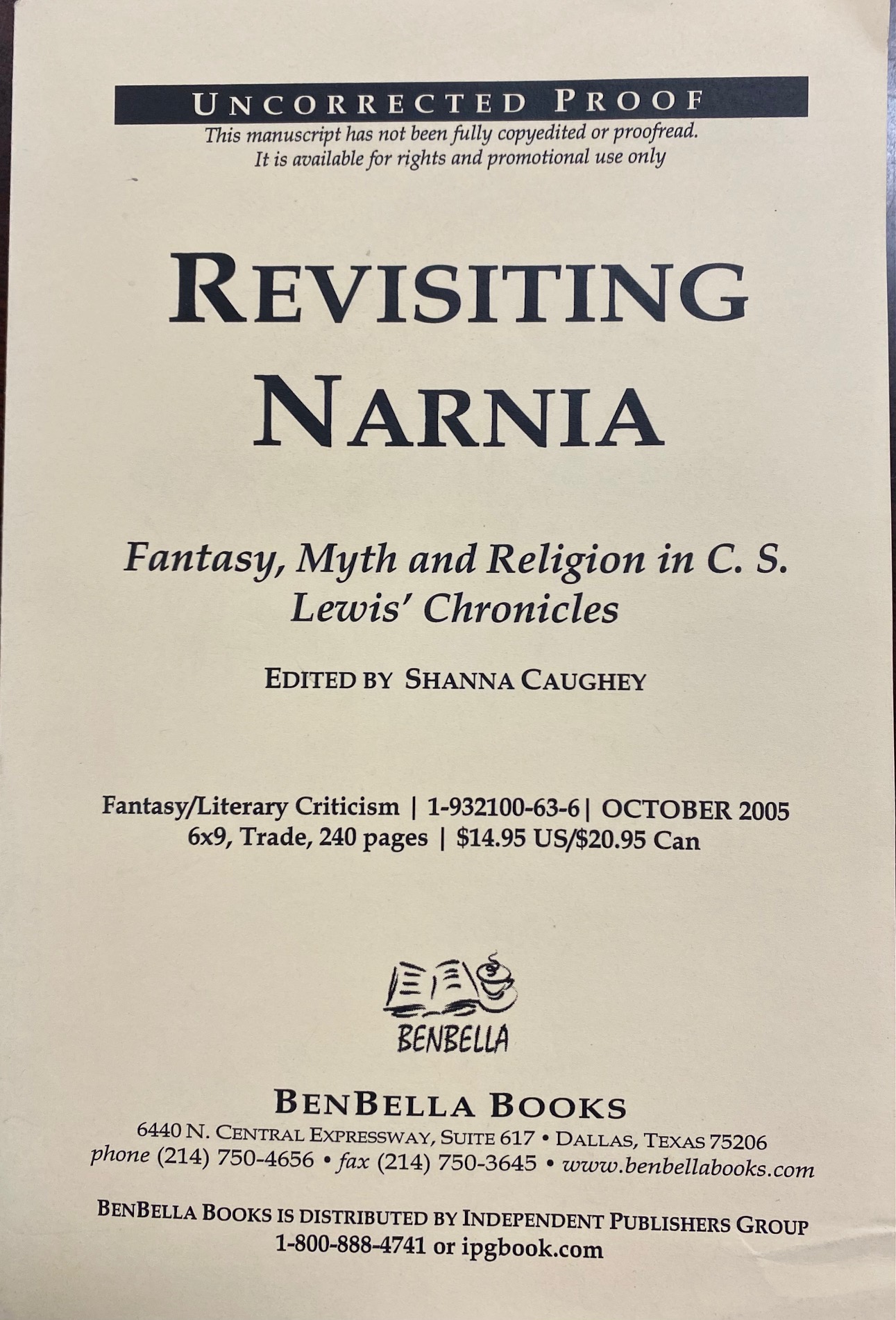 The Tomb of St. Peter: The New Discoveries in the Sacred Grottoes of the Vatican