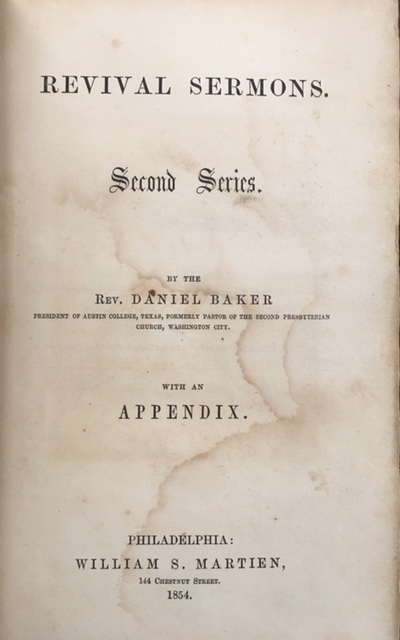 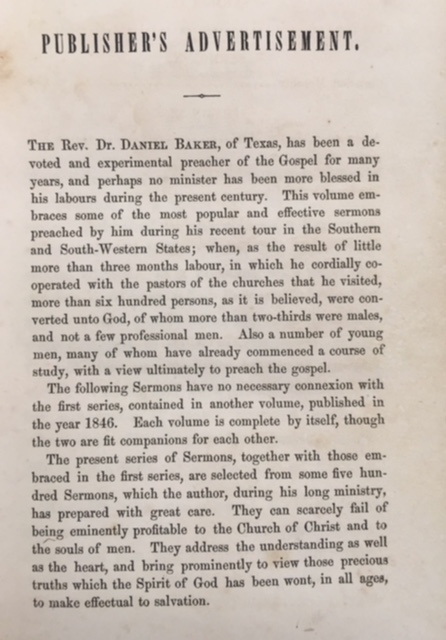 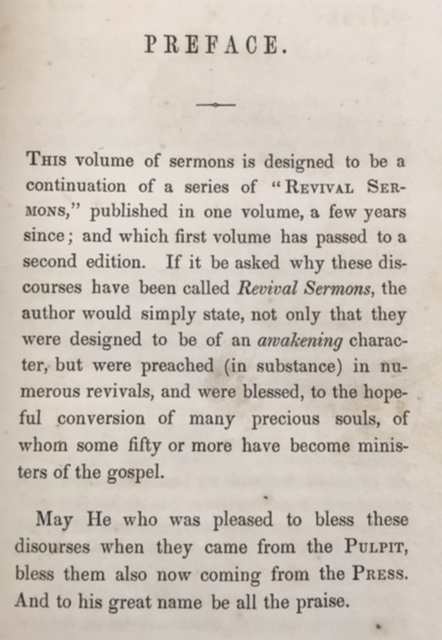 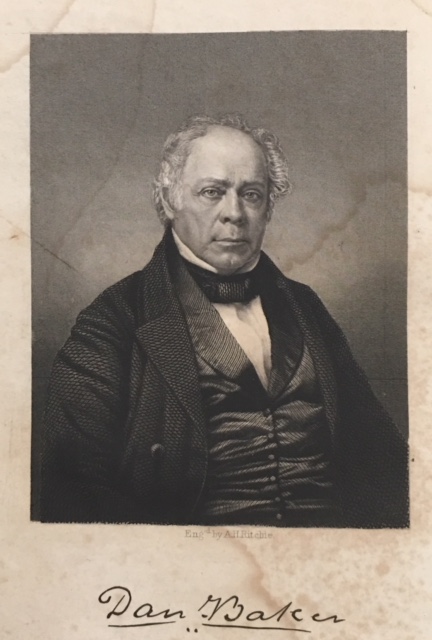 1st Edition (1854) Rebound with original boards and new spine. Frontispiece portrait of author with glassine cover. No marks or writing observed in text. Name and date (1857) on inside original end paper. Light damp stain on first few pages. Light foxing. . . . . . . . . TOC: 1.) Precious Faith -- 2.) The fulfillment of Scripture Prophecy -- 3.) The nature, sinfulness, and consequences of unbelief -- 4.) Justification -- 5.) Naaman -- 6.) The Example of Eli -- 7.) Prove your own work -- 8.) The sufferings of Christ, and their design -- 9.) The Tomb of Jesus -- 10.) Christian morality -- 11.) A sermon to young men -- 12.) The sovereignty of God -- 13.) The blessedness of being Christian -- 14.) The danger of Procrastination -- APPENDIX: Interesting Recollections . . . . . . . . . . . Daniel Baker (1791â€“1857) was an American Presbyterian minister and educator in the Antebellum South. He was the founder of Austin College, and served as its second president from 1853 to 1857. Baker started his career as a Presbyterian minister in Harrisonburg and New Erection, Virginia in 1818. By 1822, he became the minister at Second Presbyterian Church in Washington, D.C. In 1828, he became the minister at Independent Presbyterian Church in Savannah, Georgia. He then preached in Frankfort, Kentucky. He moved to Tuscaloosa, Alabama in 1836. Baker moved to the Republic of Texas in 1840. He preached in Galveston, Houston, and Chriesman. Later, he preached in Victoria, Cuero, Clinton, Goliad, Gonzales, New Braunfels, Bastrop, Wharton, Columbia, Port Lavaca, La Grange, Palestine, Brownsville, Rio Grande City, as well as cities like Austin and San Antonio. In 1848, he became the minister of First Presbyterian Church in Galveston, Texas. Baker served on the Board of Trustees of the Chalmers Institute, a boys' school in Holly Springs, Mississippi, where he had served as pastor in the 1840s. He founded Austin College in Huntsville, Texas in 1850. He hired Samuel McKinney, an Irish-born Presbyterian minister who had founded the Chalmers Institute, as the first president of Austin College from 1850 to 1853. When McKinney resigned, Baker served as its second president from 1853 to 1857.

Cigarette smoking: a clinical guide to assessment and treatment (The Medical Clinics of North America) 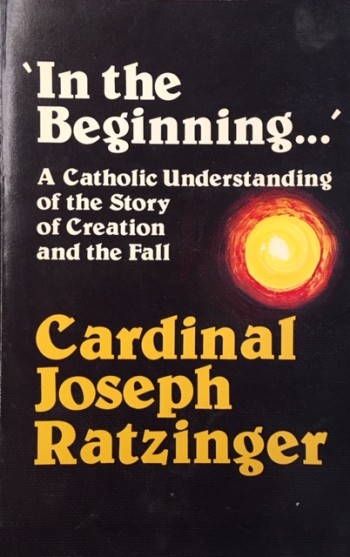