1st Edition / 1st Printing (September 1916) with Scribner Colophon on title page. No marks or writing observed in text. Binding tight and square. Gently read. No dust jacket as issued. . . . . . . . . . A novel ploanned and begun by F. Hokinson Smith and completed by F. Berkeley Smith. Illustrator was Alonzo Kimball.. . . . . . . . . . Francis Hopkinson Smith (October 23, 1838 â€“ April 7, 1915) was a United States author, artist and engineer. He built the foundation for the Statue of Liberty, wrote many famous stories and received awards for his paintings. . . . . . Alonzo Kimball (1874 â€“ 1923) created ilolustrations for books, ads, postcards, and the covers of popular magazines like Scribnerâ€™s and The Saturday Evening Post . . . . . . . . . . From the Preface: 'It was my father's practise, in planning a novel, first to prepare a most complete synopsis from beginning to end â€” never proceeding with the actual writing of the book until he had laid out the characters and action of the story â€” chapter by chapter. This synopsis, which closely resembled the scenario of a play, he kept constantly enriching with little side-notes as they occurred to him â€” new ideas and points of detail. So spirited were these synopses, and so clearly did they reflect the process of his mind, that by the few who saw them in the course of publishing consultations, or friendly confidence, they were remembered often after the finished novel had obliterated its constructive lines. A scheme like this he had prepared for 'Enoch Crane' â€” a story which, like 'Felix O'Day,' he had very much at heart. Once he had begun a novel it occupied his whole mind. He lived â€” as it were â€” with the characters he was developing, to the exclusion of all other work.' -- F. Berkeley Smith 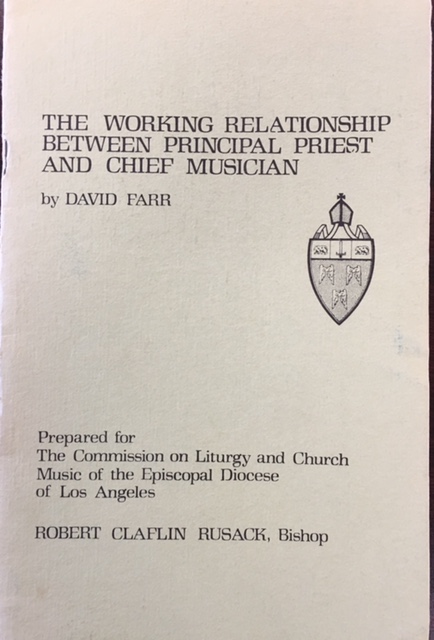 The Working Relationship Between Principal Priest and Chief Musician (Prepared for the Commission on Liturgy and Church Music of the Episcopal Diocese of Los Angeles, Robert Claflin Rusack, Bishop)